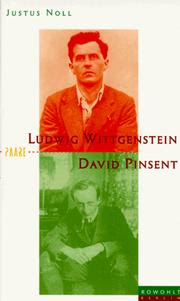 This morning I set off early to detour through Selly Park, the University, and Harborne. My intention was to find 44 Lordswood Road, an address of note for those interested in the life of the twentieth-century's most influential philosopher, Ludwig Wittgenstein. In 1913 Lordswood House was the family home of David Pinsent, close friend of Wittgenstein. On the eve of his self-imposed exile to Norway and just after a holiday there with Pinsent, Wittgenstein stayed with the Pinsent family (descendants of the philosopher David Hume) to say his goodbyes. 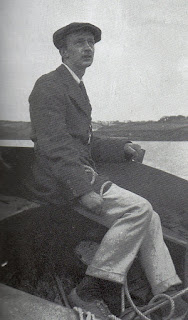 He had visited Lordswood House a year previously, in October 1912, on his and David's return from their first holiday together in Iceland. They arrived in Birmingham 7.00am, and breakfasted at Lordswood where they showed photographs from their trip to the family and acquaintances who were staying. Afterwards the Pinsents and their Austrian guest travelled by bus into the city, alighting at Five Ways to speed up in the rest of the journey by taxi to the Town Hall for a concert. 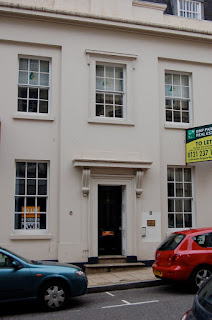 During the lunchtime interval, they enjoyed a gathering at Hume Pinsent's law office at 6 Bennett's Hill (above), before returning to the Town Hall. There Wittgenstein stood outside the front, because he found one particular piece by Strauss so distasteful. He eventually left the concert and made his own way back to Harborne. 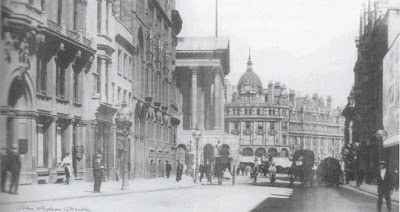 Paradise Street, Birmingham, with the neo-classical Town Hall at the end on the left, 1905.

In the evening he discussed his ideas in Logical Symbolism to Hume Pinsent and during the following morning he mastered their player-piano, and had a 'quite interesting' talk with David and his mother, Ellen Frances Parker Pinsent, about education. This is also 'quite interesting' because Ellen Pinsent at that time was a leading figure in Birmingham and within a year her influence would be felt across the country. 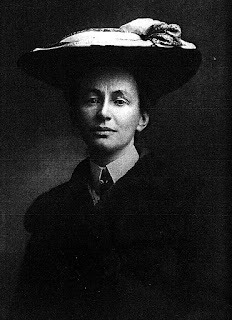 In November 1911, Ellen Pinsent became the first woman to be elected to Birmingham City Council, standing in the Edgbaston ward. She stood down from the post two years later when Hume retired, prompting the Pinsents to move to Oxfordshire. During her time on Birmingham Council Ellen Pinsent led the Committee on Special Schools. Amongst her reforms was to appoint an officer to oversee Public Health in these schools. The officer appointed was George Auden, father of poet W.H. Auden. 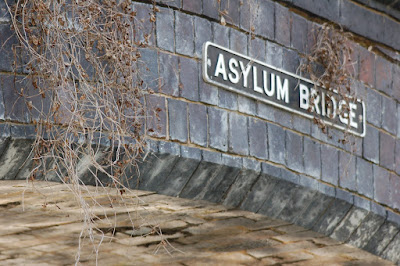 Previous to her election she had sat on the Royal Commission on Care and Control of the Feebleminded, and had formed the National Association for the Care of the Feebleminded which had worked with the Eugenics Education Society to pressurize candidates for the 1910 Parliament into supporting curbs on the mentally deficient, including compulsory institutionalization, and the prevention of having children. In a private letter to Asquith, the then Home Secretary, Winston Churchill, supported the views of the Eugenics lobby. As did Neville Chamberlain who, before becoming Prime Minister was once Lord Mayor of Birmingham (1915-16). 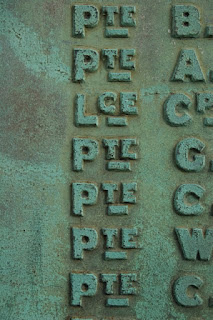 'These ideas were rooted in the fear that an unimpeded increase in the 'feeble-minded' population would lead to Britain losing its place among the world's leading nations. Eugenic theories must be placed within the context of the British defeat in the Boer War, with its shocking revelations of the general unfitness of the recruits, and in agricultural and industrial depression.'

Through her brother, Robert, Ellen met Karl Pearson, British statistician and eugenicist.  When he visited her family home she  absorbed his 'unorthodox views'. She became a member of Pearson's Men's and Women's Club and met her husband Hume Chancellor Pinsent who was also studying law with Robert at Cambridge. They married in 1888 and moved to Birmingham where Hume joined his brother's law firm, Pinsent & Co.

In July 1913, the Mental Deficiency Bill  was passed with only three votes against it. One of those belonged to Josiah Wedgwood IV MP who made an astonishing 150 speeches in 3 days in opposition, only sustained, apparently,  on barley water and chocolate. The effect of this opposition was to bring in the condition of being able to look after oneself to determine fitness. The Mental Deficiency Act 1913 drove the categories of fit and unfit permanently into the structure of society. Birmingham was not unique to have the lunatic asylum, the workhouse and the prison back-to-back in the very real, architectural sense. There are a variety of levels of existence within these complexes, but essentially everyone within, to those outside, is controlled, irrational and silent. 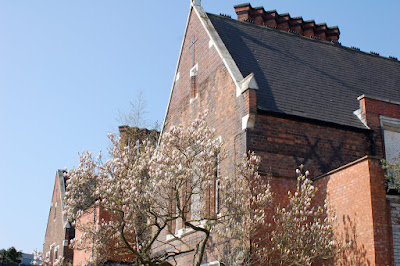 There is a campaign to save the Archway of Tears, the entrance to the Birmingham Union Workhouse.

Ellen Pinsent was appointed Honorary Commissioner to the newly constituted Board of Control (replacing the 1845 Lunacy Commission), becoming a Permanent Commissioner in 1920 and then a Senior Commissioner in 1931. She was made a Dame of the British Empire for her mental health reform work in 1938, and died in 1949. 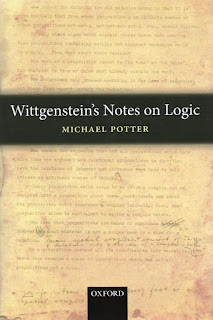 It was during his next stay in Birmingham, October 1913, that Wittgenstein dictated the typescript which would become part of his Notes on Logic. The dictation occured at the Berlitz School of Languages, which then occupied 32 Paradise Street (below), across the road from Birmingham Town Hall. The typsescript was made in German between 5.30 and 8.30pm, 7th October, 1913, and sent to Bertrand Russell. 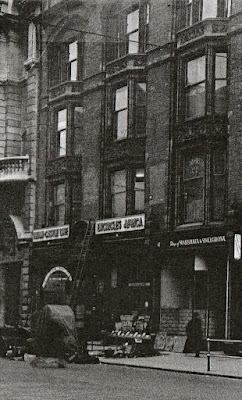 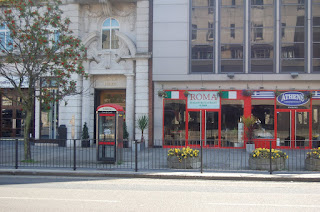 The next day Wittgenstein saw Pinsent, his 'first and only friend,' for the last time as he said goodbye to him at New Street Station. In 1918 tragedy struck Wittgenstein and the Pinsents as it did for so many friends and  families during the First World War. David who had been deemed unfit for service, was not at the front when he was killed. He had volunteered his services for aviation research at Farnborough, no doubt aided by his first degree in mathematics from Cambridge.
Birmingham Daily Mail, Wednesday May 15, 1918
Death of Mr D.H. Pinsent
Recovery of the Body
The body of Mr. David Hugh (sic) Pinsent, a civilian observer, son of Mr and Mrs Hume Pinsent, of Foxcombe Hill, near Oxford and Birmingham, the second victim of last Wednesday's aeroplane accident in West Surrey, was last night found in the Basingstoke Canal, at Frimley. 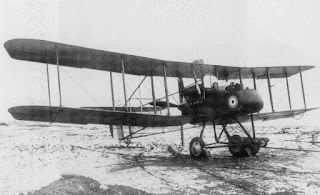 Currently Lordswood House is the name of the building listed as 54 Lordswood Road which is a bit confusing. However, being a medical practice, it fits with the history of the original house. In May 1915, two years after the Pinsents moved to Oxford (the same year the Melville brothers moved to Harborne) , it became Worcestershire V.A.D. 62, a Voluntary Aid Detachment hospital during the Great War, and afterwards, the Lordswood Maternity Hospital.

Although I didn't find the Pinsents' home, the search had led me to ask for bearings at Harborne Swimming Pool, situated to the left. An attendant told me that, in all his years, the pool had never had a street number. Stranger was the Blue Plaque on the building's facade. I hadn't been expecting one for Wittgenstein, merely an occasional visitor to the area. No, it wasn't for him nor any of the Pinsents. It was for someone who lived in the house next door, number 42 Lordswood Road:

LIVED IN AN ADJACENT HOUSE

Apparently Auden's mother whould disapprove of his walking to buy cigarettes in his dressing gown. His father was School Medical Officer for the city, with an interest in classics. Auden's conflict with his mother at Lordswood, found him relaxing with his friends at 6 Sir Harry's Road, Edgbaston, the home of E.R. Dodds, Professor of Greek, the man who appointed Louis MacNeice (1930) and George Thomson (1937) to the classics department of the University. George Thomson became head and appointed Nicholas Bachtin (1938) [Nikolai Baktin , elder brother of Mikhail].

Thomson lived firstly at 32 Goodby Road, Moseley, and then from 1940, at 84 Oakfield Road, Selly Oak. Robert Melville remembers Thomson's Oakfield Road home as a place where artists and musicians from Birmingham University would meet. I recommend Tessa Sidey's book Surrealism in Birmingham 1935-1954. George Thomson (1903-1987) and Nicholas Bachtin (1896-1950) were friends of Wittgenstein's from Cambridge. 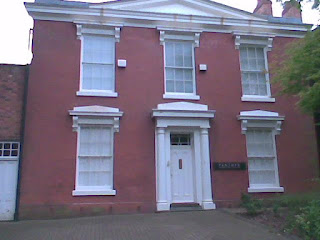 Bachtin and Wittgenstein would spend evenings reading Dostoyesky and Pushkin in Russian, but it was an evening reading through the Tractatus with  Bachtin, in 1942, which prompted Wittgenstein to seek publication of the Philosophical Investigations for a second time. Bachtin had several addresses in Birmingham; 27 Wheeley's Road, then moving to the next road along, 37 George Road (above) , then the next, 36 Frederick Road, and finally , 12 Cambridge Cresent where he died suddenly of a heart attack, aged 54. He left behind 5 boxes of notes for an extensive work on rethinking the nature of language. There is no grave for Nikolai Bakhtin in Birmingham. He was privately cremated and no flowers were requested. His widow, Constance Mary Alix Bachtin, stayed in Cambridge Cresent until she too died, in 1959, after enduring severe multiple sclerosis for many years. 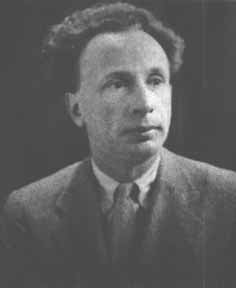 'One of the strangest men I have known and one of those best worth knowing'
E.R. Dodds, 'Missing Persons'

It was the end of a short but interesting life. Born in Orel, Russia, 1896 elder brother to Mikhail Bakhtin; 1912, attends university in Odessa; 1916, joins the Tsar's army on impulse for adventure and to look good in the uniform of a lancer; sought refuge in the Crimea after the Revolution; by chance, he meets his old C.O. who persuades him to join the White Guards during the Civil War; flees and becomes a sailor, gets drunk and joins the French Foreign Legion until he is badly injured three and a half years later. He then lives in poverty in Paris while writing for The Link and Numbers, is rescued by friends and admirers of his work, attends the Sorbonne, then Phd. at Cambridge, teaches in Southampton, and joins George Thomson's classics faculty at Birmingham University in 1938. He goes on to be the Linguistics department. 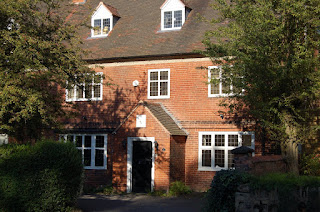 Roy and Fania Pascal also moved from Cambridge to Edgbaston (17 Rotten Park Road, above) when Birmingham University appointed Roy who, like Thomson, had been a member of Maurice Dobb's communist circle at Cambridge, to the Chair of German in 1939. In Cambridge Fania had taught Wittgenstein Russian, and she would see him often when Wittgenstein visited the Bachtins in Birmingham.

'What I do know and what in itself would call for attention to the friendship is that Wittgenstein indeed loved Bachtin, was unusually happy and gay in his presence, and never dropped him as he easily did others. His was the rare case of Wittgenstein taking a person as he found him. All this in spite of the fact that they were poles apart in outlook and character. Bachtin was given to extremes of passion and an uncontrolled exuberance of feeling and expression. He always seemed on the verge of erupting, like a volcano. He suffered from many irrational fears and obsessions, loved expansiveness, was a great gourmet. Unlike Wittgenstein, Bachtin, though childless, could take delight in children, even in cats. They did however share a kind of childlike innocence, and lacked everything commonplace.'

According to David J. Davis's contribution to "Great Men of Harborne," Auden's family home at 42 Lordswood Road was demolished in 1979, although his remaining family had moved nearby to 13 Court Oak Road after Wystan's departure to America in 1939.  Next door, Lordswood House was demolished several years beforehand. The Lordswood Maternity Hospital had closed in 1968, leaving the building to fall victim to vandals. 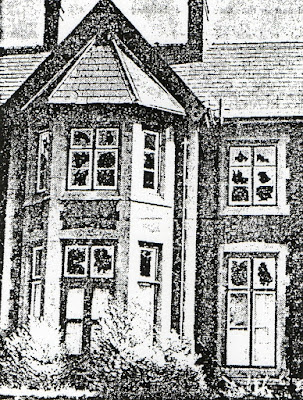